Hey, nice to see that you are interested in the functionality behind the automated creation of tracks. In the following the most important aspects and principles used are explained. It helps if you already had contact with optimization but it should be also understandable if you got no previous knowledge whatsoever.

The intended purpose of this text is to inspire you to take on your own ideas. Most problems are easily solvable without rocket science. Sometimes it just takes a little nudge in the right direction.

The evolutionary algorithm is structured as followed:

Every individual of the initial population gets a randomly ordered selection of usable track tiles. Only the first tile is defined to be a start tile and the last tile is fixed to be the finish tile. Generally, you want the initial creation of the individuals to be as randomly as possible. Often humans have assumptions regarding the composition of the initial population and therefore can skew the evolutionary process if they implement these assumptions. Thus, the solution space is reduced and possible solutions can't be reached. Instead just trust the evolutionary process.

The following simple example explains how the fitness function works and why do you want to use it. Imagine you want to play a game of Flamme Rouge. You like the tactical aspect of ascents so there should be quite a number of ascents in the track. Furthermore, the table you play on is quadratic so the track needs to fit on there. Other factors like descents, cobblestones or breakaway tiles are not important to you.

Just from this information you can be shown four different tracks and you would have no problems ordering them regarding the likelihood you would select them. If you see the following four tracks you instantly can decide which track would be the best for your situation.

Track 1 does not fit any of your criteria. The track is super long stretched and would therefore fall off both sides of your table. No ascents are included so it is also boring for you to play. You would not select this track.

Track 2 instantly draws more attention from you than track 1. You see lots of little ascents and you can already feel the suspense it would bring in a tight race near the finish line. Unfortunately, this track is also way to big for your table, so while you like the track you would look out for a different option. 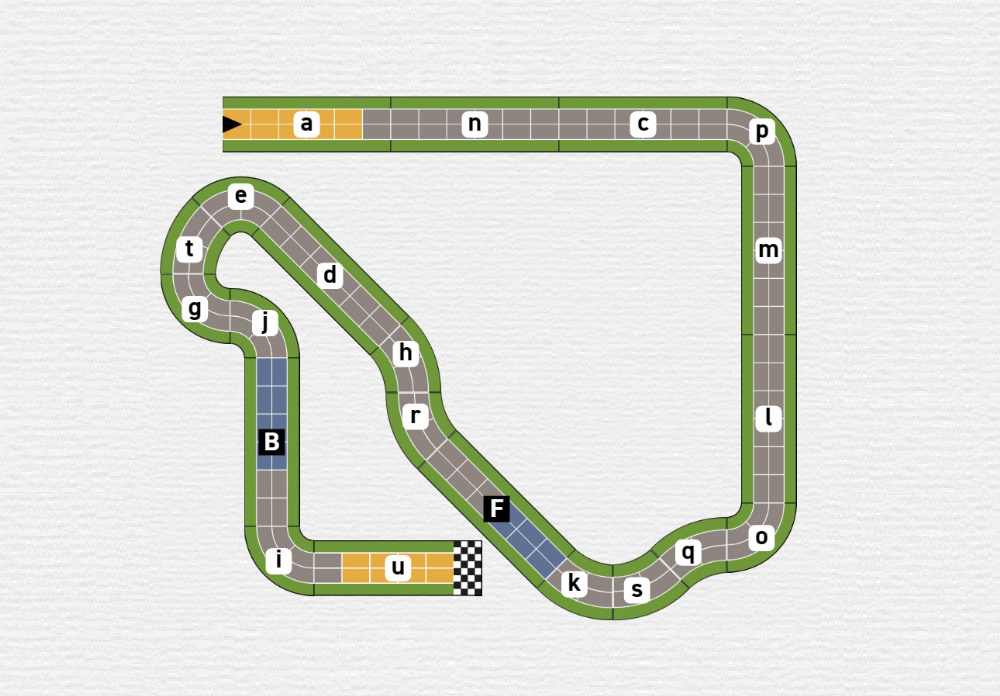 When you see track 3 you can breathe a sigh of relief. So, there are tracks which fit on your super pretty table, like your significant other said, while you asked yourself why people even produce tables that small. Gameplaywise there are no ascents at all, so you put all your hope in track number four. 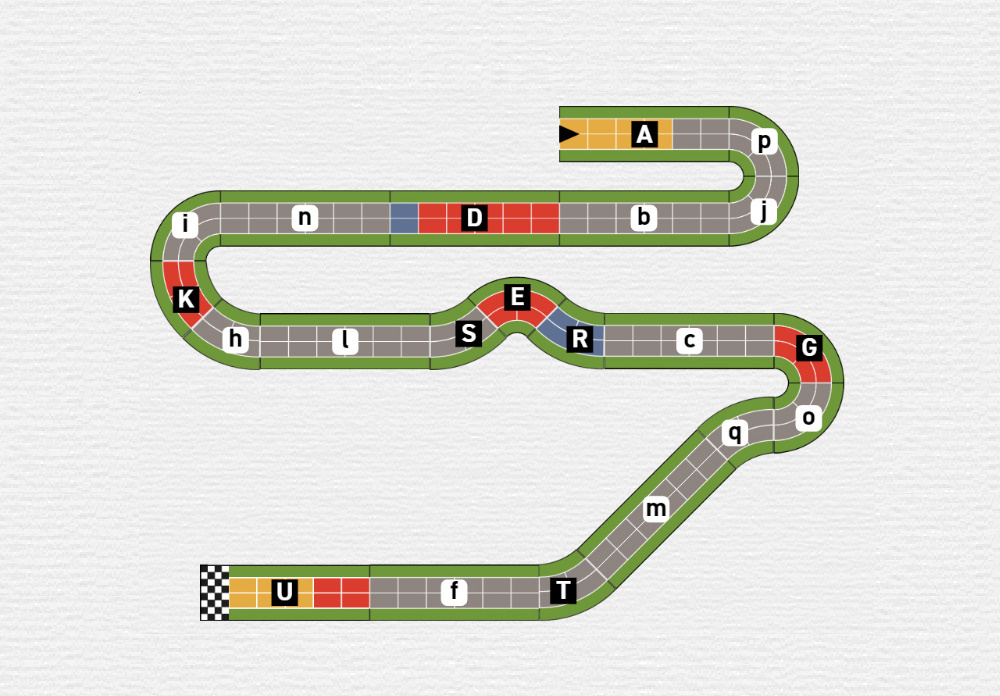 One glance at track 4 and you know you've found what you've been looking for. It fits all your requirements. It has lots of ascents and even will fit on your table. You would instantly select this track.

A fitness function calculates a fitness value for a given individual. Because we use a minimizing function here, an individual which fulfills all sought after criteria has a fitness value of zero. If we find such an individual, the goal of the evolutionary algorithm is fulfilled and we have a track to present to the user. Each criterion which is not fulfilled however returns a penalty value. For every individual the fitness values are stored to be used in the next step.

For instance, there are two criteria regarding the physical dimensions of a created track. One criterion compares the length and width of the track with the given selection of the user. Another criterium is needed to check if the physical layout of the track is acceptable. Because if you randomly order track tiles together it can happen that the track overlaps. So your track could be within the selected dimensions but would be unplayable at the same time. Therefore, every track is physically simulated and checked for overlaps in the track.

All other criteria are involved with the properties of the created track. So is the number of ascents, descents or cobblestone tiles compared to the selected values of the user, like shown in the example. Another criterium evalutes the layout and ordering of the track tiles.

Generally, it is possible to create a lot of different criteria for the fitness function, but it is best to limit them to the ones really needed. Aspects like the correct start and finish tiles or a check for doubled tiles could also be implemented. But for these it is easier and more practicable to already handle them in the track creation process.

With the evaluation of the fitness function all individuals can now be ranked regarding their fitness. This is needed because only the fittest individuals will stay in the evolution process. Bad individuals will be dropped from the pool to make room for potential better individuals.

The selection of the fittest individuals is done with the NSGA-II algorithm. Because we have multiple criteria which are evaluated in the fitness function, the selection algorithm needs to be able to handle multi-objective optimization. NSGA-II orders all individuals in pareto fronts and orders them regarding their crowding distance. Afterwards the best individuals are selected to be retained. The next images show the principles of the algorithm. 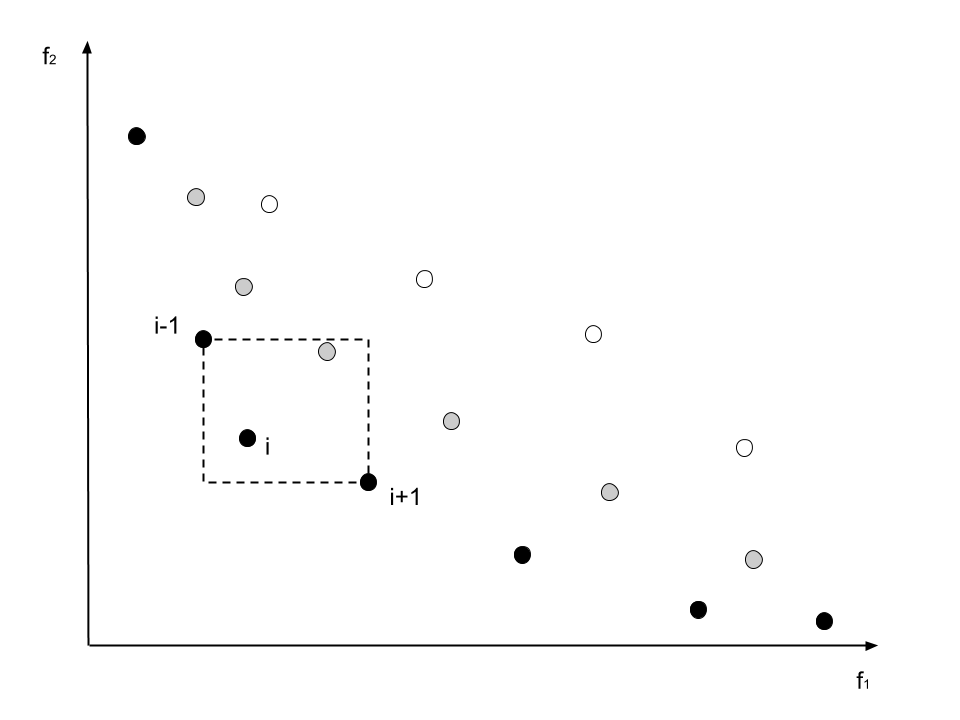 The graph shows the exemplary sorting of individuals into pareto fronts. The black individuals are all non-dominated and therefore the best individuals. For every individual in the front the distance to it's neighbours is messured. The more isolated an individual is, the better it is ranked inside it's front. 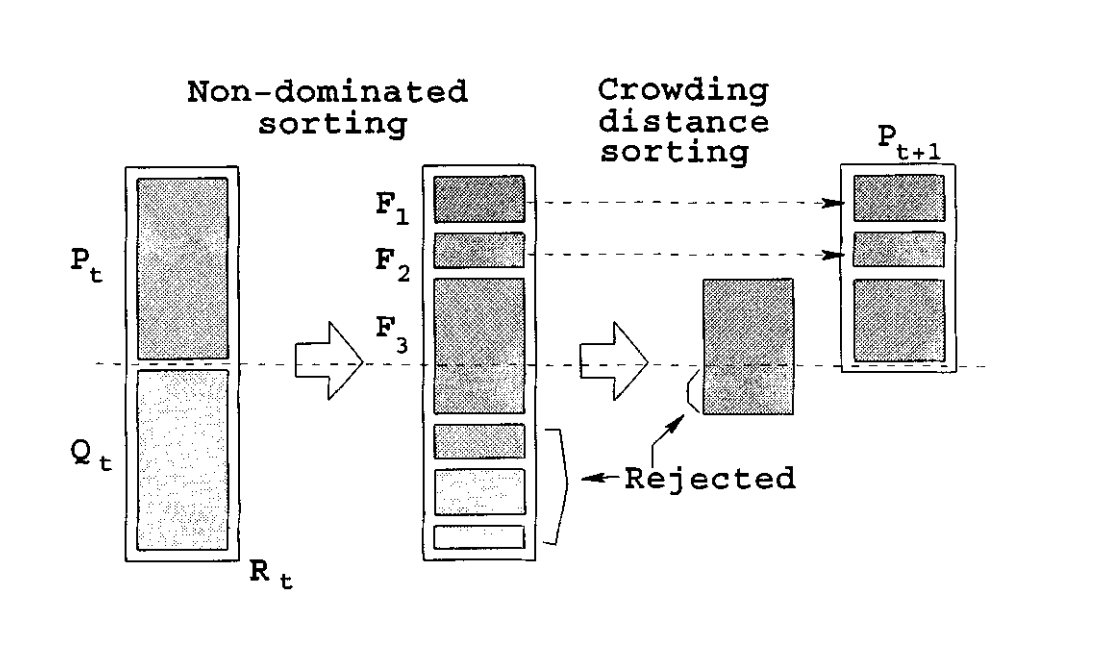 After the sorting into the pareto fronts and the ordering regarding the crowding distance, the best individuals are selected.

All these mutations are done randomly. Like in nature this can have positive, negative or no effects at all. We just hope that through the mutation some individuals improve and therefore push the population closer to the desired meeting of the criteria.

With the mutation all needed steps for the evolutionary algorithm are introduced. From this point on, the algorithm runs through an iterative cycle.

After the mutations the individuals of the population evolved and changed. Therefore, a new evaluation via the fitness function is necessary. Should an individual reach a fitness value of zero the algorithm would conclude. All criteria would have been met and the track would be returned to the user.

If no individual has a fitness value of zero the algorithm continues. In continuation of the iterative cycle, the best individuals are selected, transferred into the next generation and then mutated again. The iteration has two termination conditions. First is the addressed fitness value of zero. Second termination condition is the achievment of a specified number of maximum generations. If the criteria can't be met, the algorithm would run endlessley otherwise. It is also possible that the population evolved into a state from which it can't improve, but is also not good enough to meet the set criteria. 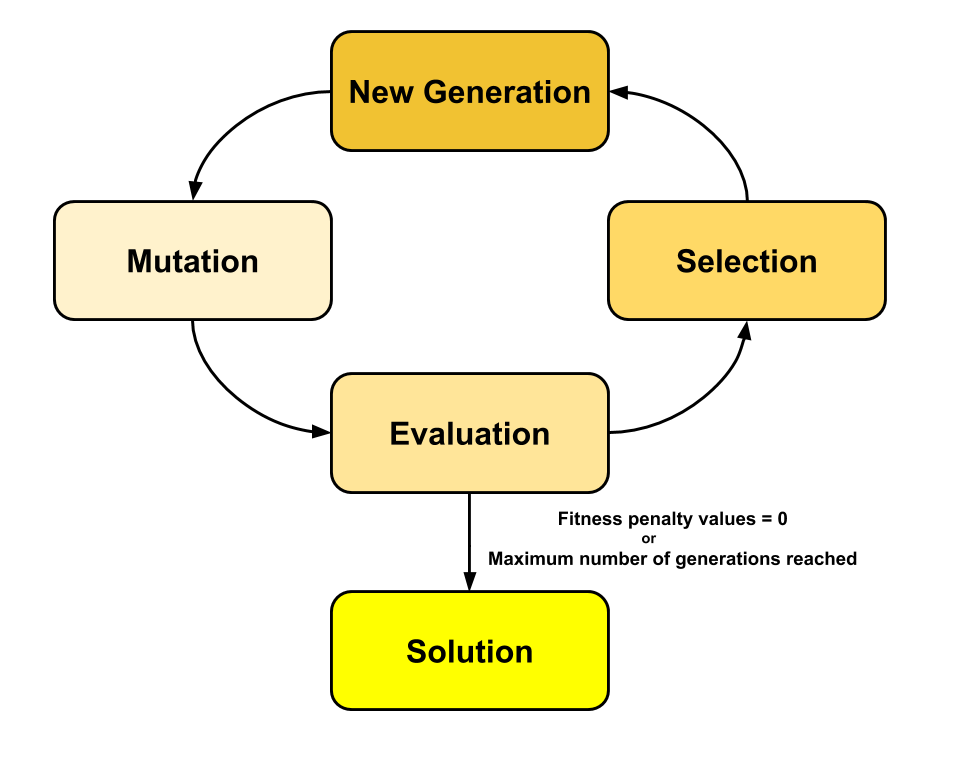 The iterative cycle of the evolutionary algorithm runs until either a viable solution is found or the maximum number of generations is reached. If the algorithm ends through the generation break condition, no optimal solution has been found. In this case the best-found solution up to this point is returned.

This is the process which is behind the automated track generation. Hopefully you learned something or got an idea for your own problem. Check out the listed book of Luke (2013) for an overview of metaheuristics and an entry into the topic.

If you are interested in the topic of optimization and metaheuristics, have a look at the following book. It is free, super well written and has lots of pseudocode examples: